Da Thoroughbreds also has Illbliss, Obiwon, MGB Elajoe and Amaka as members. The group was formed while all its members were studying at the University of Nigeria, Nsukka.

A cross-section of Da Thoroughbreds in 2004. (AfricanHipHop)

Describing Da Thoroughbreds in his June 2004 article for African Hip-Hop, Harry Okoh, “Just as their name implies this Lagos based posse are pious hiphop apostles who are not only well versed in the tenets of real hiphop but are also very conversant with the dynamics of the industry both locally and internationally, all these in addition to being respectable professionals in the fields of banking, marketing communication and information technology.

“Infact to describe more aptly, if all the hiphop artists in Nigeria represent the regular infantry battalion of the music army, this group of four emcees and a supervising raptician are the equivalent of sandhurst trained special elite commandos.”

Due to improper documentation of our music in pre-internet Nigeria, not much is known about the rapper. But here are five things to know about the late rapper. 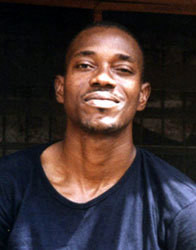 B-Elect during his Ojodu,Berge days with his group, Da Thoroughbreds. (African Hip-Hop)

Born in the late 70’s in Sapele, Delta State, Andrew Bright Erighono grew up in Jos, Nigeria. In 2009, he told Guardian Life Magazine that he had been into Hip-Hop dating back to 1984, but his love for the culture was truly ignited after he travelled out of the country.

He told Guardian that, “My parents used to take us on holiday abroad, so, I had the opportunity of buying all sorts of tapes. What actually changed my life was the tape I bought by a guy called Mr. Magic; he plays all the hit songs in New York. If Mr. Magic plays your song, then you are good. When I listen to that tape, I heard some good artistes such as LL Cool J and others, and I said to myself, ‘this is a different kind of sound.”

Around this time, he also became a DJ and breakdancer. The late rapper also told Guardian that his father believed in two things; religion and education.

B-Elect was from a family that seriously believed in education. His brother was a Lawyer and got his Master’s by 21. On his own, young Andrew was made to go study Medicine, but he dropped out after four years. He had a passion for the arts and nothing was going to stop him.

Thus, he attended the University of Nigerian, Nsukka, (UNN) and graduated with a Bachelor’s Degree in Fine Arts – although, he would have loved to study Architecture.

Speaking on how he chose to drop out of medical school, he told Guardian that, “My elder brother is a lawyer; he got his master’s at 21. So, my father was like, ‘you must study medicine. I felt it wasn’t me; it was like rebellion. I wasn’t doing badly, but it was my father’s idea. I had wanted to study architecture because I love arts, but I ended up studying Fine Art in UNN.”

B-Elect started writing in the early 90’s and planned on releasing an album in 1999, but put a hold on it. According to Harry Okoh, he felt the industry was underdeveloped and rappers were not treated with respect.

While B-Elect – at this time, just Bright had been doing gospel rap in Jos, and was doing Church shows, when he arrived at UNN, he met DA Thoroughbred, already consisting of Ilblis, Obiwon, Elajoe and Amaka (Chief Rocka, Elajoe’s sister). He was also the most senior member of the group.

With Thoroughbreds, he released the 5-track Street Hop EP on which he had a great performance with ‘My ode to hiphop.’ Together, the group won Best Hip Hop song by a group/duo at the maiden edition of Hip Hop World Awards (Now Headies) for their title track, ‘Streethop’ in 2006.

Sadly, they never released an album together. Each member of the group went to find their respective causes in life. Notably, illbliss went solo after coming back from the UK, and Obiwon became a banker.

On his own and under his Blightz Records, he released a compilation of his old songs titled, Beats, Rhymes and Theology in 2006, Hard Listeners in 2011 and Gospel Truf in 2016.

Throughout his career, he was known for his clean content and refusal to use curse words and vulgarity. He once called himself, “The Asa of rap music” because he felt himself different in every way.

From a very creative family, B-Elect was really into the arts and dedicated his life to it. Before his death, he held an art exhibition tagged, Different Strokes and Relationships. Also before his death, he had the Naira P Show on Metro 97.7 FM every Saturday at 9 pm.

Shortly after Da Thoroughbreds disbanded in the mid-2000s, Big Hommie as he was fondly called by his friends became the quietest member of the rap quartet.

He was a marketing, branding, communications and PR practitioner. He was also a writer, poet and public speaker on whom Harry Okoh says, “peers suspected he was a member of some novel cult of intellectuals.”

At the time of his death, B was married for six years. He survived a life-threatening surgery in 2009 and lost his mother the same year. Not much is known about his family, but one fact is that he has one brother.

Davido apologises to Pamilerin on behalf of Peruzzi

Baby on Board! HGTV&#039;s Christina Anstead Is Pregnant With Her 3rd Child!

Author TanjarinPosted on March 22, 2019March 22, 2019 0
Christina Anstead — whom you probably recognize from HGTV’s hit show Flip or Flop — is expecting her first child with her husband, Ant...
Read More

Author TanjarinPosted on May 16, 2019May 16, 2019 0
Cool FM OAP, Destiny Amaka shared these hot bikini photos of herself on Instagram this morning.  Such a banging body! More photos below… Source:...
Read More

Author TanjarinPosted on March 25, 2019March 25, 2019 0
By: Shirley Ju (@shirju) (AllHipHop News) Travis Scott is known to put on the most lit, cinematic concerts this generation has ever seen —...
Read More