By Tanjarin on Aug 20, 2019
Salah believes VAR takes the element of chance out of football and should only be used to protect players from dangerous challenges.
While VAR was used at the 2018 men’s and 2019 women’s World Cups and last season’s Champions League, the system is making its debut in the English Premier League this term. 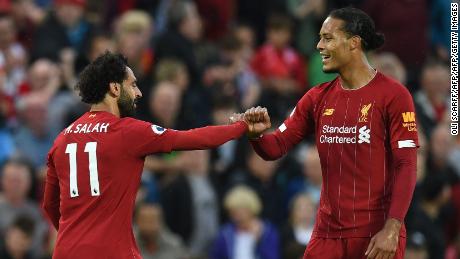 READ: Salah’s message to Pep Guardiola: The Champions League is football’s ‘biggest competition’
READ: Salah comforts young fan floored by streetlamp
“I don’t like it … that’s my answer, always. I don’t like it,” Salah told CNN’s Becky Anderson when asked about the use of VAR.
“I love football how it is,” added Salah, who was interviewed at Liverpool’s Melwood training ground on September 10. “It’s like that with the mistakes of the referee, with the aggression from the player sometimes.
“It’s OK sometimes to protect the players from dangerous play. But OK, that’s it, in my opinion, that could be the only reason that happened, just to protect the players.
“But for me, I accepted the football with the mistakes of the referee, mistakes of the player, I don’t know, whatever. That’s how the football gets more excited.” 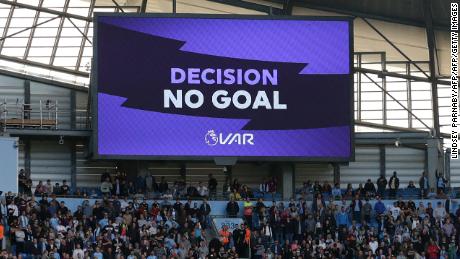 READ: Manchester United vows to take action after Pogba targeted by racist abuse on social media
READ: Europe’s next generation of football stars shine across the continent
On Saturday, Gabriel Jesus’ late goal for Manchester City, which would have given it a 3-2 win over Tottenham Hotspur, was ruled out by VAR.
The VAR review ruled that the ball had touched City defender Aymeric Laporte’s arm before the Brazilian struck home. City manager Pep Guardiola was also unhappy VAR hadn’t given his team a first-half penalty after Rodri went down in the box.
“It’s a penalty and Rodri went down but VAR in that moment was taking a coffee,” said Guardiola.
On Monday, the International Football Association Board (IFAB) — soccer’s rule making body — called for patience from managers, players and fans as VAR beds in.
“The VAR concept is still at the beginning. We talked to other sports and everyone told us this is a 10-year project until people really understand how it works,” IFAB secretary Lukas Brud told VAR from Perfect.
Asked about what impact he thinks VAR, Salah who last season was forced to reject accusations of diving, added: “More penalties for me, you will see that.”
Salah was the beneficiary of VAR in last season’s Champions League final with Liverpool awarded a penalty in the opening 30 seconds of the contest after Tottenham’s Moussa Sissoko was adjudged to have handled the ball after Sadio Mane attempted a pass.
Salah scored from the penalty spot to set Liverpool on its way to a 2-0 win in Madrid and a sixth triumph in European football’s premiere competition.
This season has started in similarly successful fashion with Salah on target in the opening Premier League win over Norwich.
Playing as part of a front three alongside Senegal’s Sadio Mane and Brazilian Roberto Firmino, Salah forms part of European football’s most prolific striking trios.
READ: Premier League predictions: Liverpool or City?
READ: Premier League clubs spend $1.7 billion in summer transfer window
But Salah, who scored 44 goals in all competitions in his debut year at Anfield in 2017/18 and 27 last season, says he considers himself a winger rather than a forward.
“I’m not a striker, I play as a winger, so it’s my job not just to score but to also assist, play with the midfield.
“I play on the wing which no one recommended. For a long time I didn’t play as a number nine.
“I’m comfortable with that. It’s not my first job. Like, the number one his job is only to score but as a winger it’s not just to score, it’s to give assists … and play with the team. I’ll do a lot of things to defend.”
Preview post