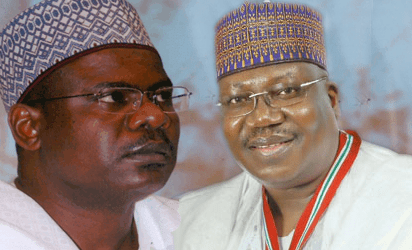 Senator Ahmad Ibrahim Lawan representing Yobe North has been nominated to contest for the Senate President of the 9th National Assembly.

In like manner, Ali Ndume was also nominated to contest and, in effect, the duo are in the contest for the office of the Senate President.

The clerk of NASS, Mohammed Ataba Sani-Omolori while presiding over the tensed poll announced that the pattern of voting will be by open-secret ballot system.

However, Lawan during his acceptance speech said, ” This is an opportunity to work together and remain United as an institution.

“Sustain good governance in this country.

“As representatives of Nigerians, we are faced with the reality of ensuring that nothing comes between us.

“We shall ensure to work as a team. I’m of the APC stock and with the PDP, I believe that having come here, the story we can tell is that we have been able to work together and deliver those essential legislations.

“Provide security, welfare. Security tomorrow will be better than security today. We shall ensure employment, sustain the economy that will work for all Nigerians.

“I will work with all of you and ensure that our political differences will not hinder us for patriotic reasons”.

Also, Ndume said, ” I have a nine point agenda to run the office of the Senate President.

He said, ” I will change the office of the Senate President to senators President.

“It will be an office of an individual that will be one among equal.

“Powers of the lawmakers virtually have been taken over by the office of the Senate President. And I will ensure that such a scenario will cease to exist.

“I will promote security, infrastructure and fight against corruption. Also, yearly budget being sponsored by domestic and external borrowing will be minimised.

“There will be three months timeline within which to pass the budget. In my thinking, the timeframe is enough.

“I will work hand in hand with the executive.

“Also, I will look into the controversial issue of the constituency project with a legal backing.

“I will take care of the welfare of my colleagues, NASS workers and former colleagues.

“I will also make sure that we should control our resources without leaving it entirely in the hands of presiding officers”.

Meanwhile, the election is currently ongoing.

Obasanjo Queries Buhari: Why Are Nigeria's Three Top Leaders From The Core North?

Author TanjarinPosted on June 10, 2019June 10, 2019 0
Less than two weeks after the inauguration of Hon. Emeka Ihedioha as the new governor of Imo state, six lawmakers of the State Assembly...
Read More

Author TanjarinPosted on July 24, 2019July 24, 2019 0
By  Levinus  Nwabughiogu  Comrade Peter Akpatason is the Deputy Leader of the House of Representatives. He represents Akoko-Edo Federal Constituency of Edo State. He...
Read More

Author TanjarinPosted on March 23, 2019March 23, 2019 0
The Bauchi State Commissioner for Finance and Economic Development, Hon. Garbi Mohammed Akuyan, who resigned his appointment on Friday has dumped the All Progressives...
Read More

Author TanjarinPosted on May 17, 2019May 17, 2019 0
The Independent National Electoral Commission (INEC) has said it will continue to recognize Omoyele Sowore as the authentic National Chairman of the African Action...
Read More

Author TanjarinPosted on June 7, 2019June 7, 2019 0
The battle for the soul of the Nigerian Senate has taken another twist and turn as President Muhammadu Buhari is concluding plans to drop...
Read More