According to a statement by his media aide, Femi Adesina, the president had a message for all those he met.

“Come to Nigeria and prosper. Come and have handsome returns on your investments, within the shortest possible time,” the President told the groups.

In a brief review of those who the President met, Femi Adesina said: “Sheikh Ahmed Al Maktoum is a member of the Dubai ruling family. He is also a private investor and member of several boards of companies, both state-owned and private. He is interested in establishing a power plant in Lagos, and studies have already been completed.

“Lulu Group operates a chain of supermarkets in the Middle East and Asia. Mr. Yusuff Alli, Chairman of the group, told President Buhari that the outfit, with headquarters in Abu Dhabi, has over 164 supermarkets and shopping malls. It employs over 50,000 people.”

Adesina noted that the interest of the group is to work with Nigerian farmers, using local produce to ensure food security. Quality, affordability, and hygiene are the watchwords of the company. 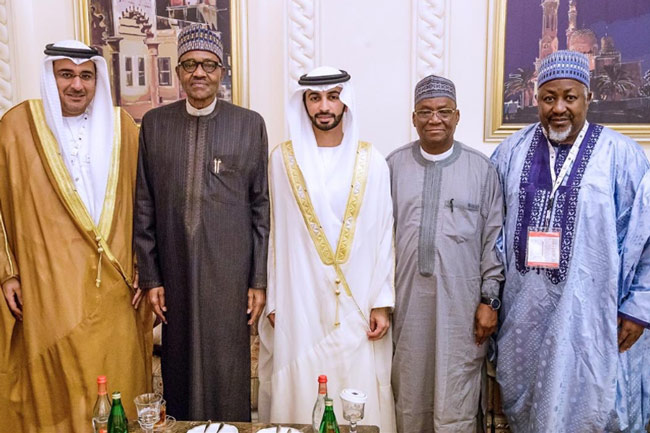 HE President Muhammadu Buhari held a series of meetings with some of the top-tier businessmen in the UAE from the Energy, Infrastructure, Property Development, Hotels, Hospitality, Food Processing, and Retail sectors. 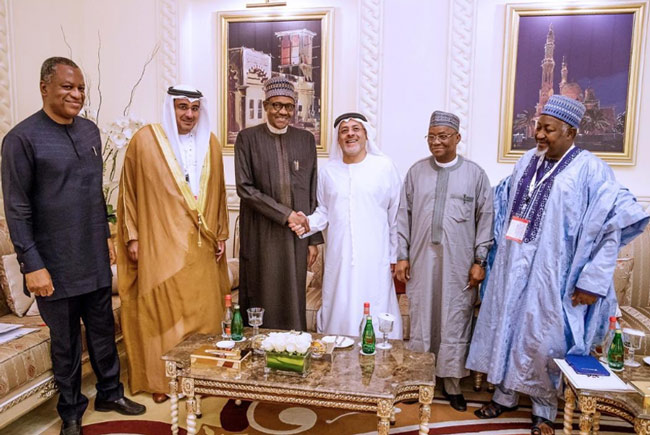 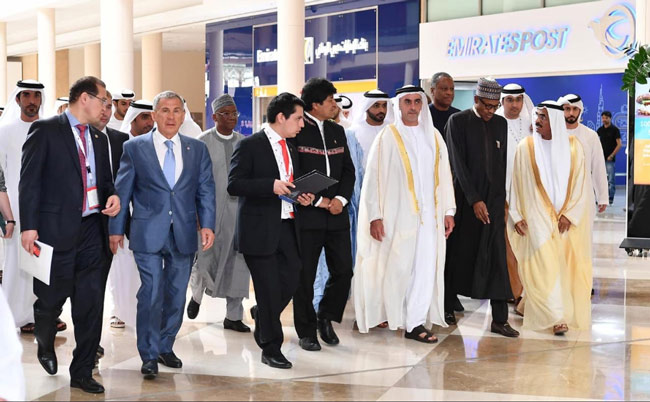 “Also in the bilateral meeting with President Buhari was Sheikh Hussain Al Nowais, Chairman of Amea Power. The company develops, owns, and operates thermal and renewable energy projects in Africa, the Middle East, and Asia. Its wide range of power solutions include conventional – gas, coal, oil, and renewable – solar, wind and hydro.

Apart from power, the company, which owns Rotana Hotel chain, is also interested in the hospitality sector in Nigeria.

One of the world’s leading developers and a major contributor to Dubai’s real estate transformation, the company’s current and future retail project portfolio covers nearly 17 million square feet of leasable space. They are keen to expand their investments in Nigeria.

Abu Dhabi Fund for Development (ADFD) has supported over 66 projects in 29 African countries. They include rural solar power and water projects, and that was the focus of the discussion, as Sheikh Mohammed Saif Al Suwaidi, the CEO, met with President Buhari.

The bilateral sessions were not concluded, till the Nigerian president had met with Mr Jitender Sachdeva, CEO Skipperseil Group. An integrated energy company with operations in the manufacturing of substation equipment, discussions were on engineering processing, construction of transmission lines and substations for utilities, institutions, and industries.

Author TanjarinPosted on May 22, 2019May 22, 2019 0
President Muhammadu Buhari has urged Nigerians residing in Saudi Arabia to respect the laws of the country especially as it relates to the prohibition...
Read More

Author TanjarinPosted on March 21, 2019March 21, 2019 0
There is palpable anxiety among political players in Osun State as the election tribunal sitting on the petition filled by the Peoples Democratic Party,...
Read More

Author TanjarinPosted on July 3, 2019July 3, 2019 0
A former aide to President Muhammadu Buhari on Financial Crimes in the Federal Ministry of Justice Mr. Biodun Aikomo has stated that, “the biggest...
Read More

Author TanjarinPosted on May 22, 2019May 22, 2019 0
Ghana national team captain Asamoah Gyan on Wednesday reversed his decision to retire from international football, just weeks before the Africa Cup of Nations....
Read More

2023 Presidency: Why Buhari Should Hand Over To The South – Pastor Bakare

Author TanjarinPosted on July 29, 2019July 29, 2019 0
The Senior Pastor of the Latter Rain Assembly, Tunde Bakare, has advised President Muhammadu Buhari to handover to a southerner in 2023. The cleric...
Read More